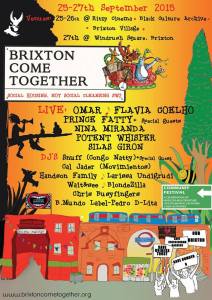 Brixton Come Together Festival is returning for a weekend of music, film, activism, photography, literature and gastronomy.

The festival, now in its fourth year, will take place this weekend September 25 to 27.

This year’s theme is “Social Housing, not Social Cleansing”.

The independent festival will feature community stalls that aim to connect, promote and support local struggles/campaigns; focussing on the rapid gentrification of the area – which prompted the birth of the Reclaim Brixton movement back in April.

The event will be held at the Black Cultural Archives, the Ritzy Cinema, Brixton Village and Windrush Square.

There is a full program of live music, DJ’s, workshops, talks, films, healing, yoga and Brazilian carnival. Performers include Omar, Nina Mirand and Potent Whisper.
There will also be a new children’s area with a Selva interactive performance, a circus and theatre fusion.

The full list of musicians, artists, speakers and performers, from Brixton to Brazil, will be announced soon.

For more information or to get involved email: cometogetherbrixton@gmail.com or visit Brixton Come Together’s Twitter and Facebook pages.

In addition to the exhibition, the weekend will also feature a number of exciting activities on each day providing entertainment for all ages. Highlights include a 3D Lego Big Build of Battersea Power Station, featured art works from the Royal College of Art and pieces from the Wandsworth Borough Collection, live printmaking with the up and coming ‘Print Wagon’, musical performances, special Family Saturday activities including BAC’s ‘The Bees Knees’ indoor play space, on site construction & architectural photography exhibition from View Pictures, a Battersea Power Station inspired brunch and Sunday film screening programme. BAC’s well-known Scratch Bar will have food and drinks available to purchase for guests throughout the weekend.

We’ve booked some tickets for this show and we’ll let you know more details in the next few days. This is the first time in seven years that the Shaolin Kung Fu masters have been in the UK.

Shaolin is the ultimate display of theatre and physical prowess. The 20 member cast perform incredible feats, combining traditional Shaolin Kung Fu, inch-perfect choreography and dramatic lighting and sound that evokes the spirit of their traditions in one stunning performance.

Once again we are booking tickets for the experimental theatre company’s show described as a “dreamlike installation”. More details soon.

We are getting towards the end of the development. Flats A&B should complete by early October with the two new build flats, J&K, completing by the middle of October. Landscaping will follow, together with the construction of new bicycle storage and refuse facilities. All in all everything should be finished by mid-November.